Debasish Parashar is a Creative Entrepreneur, Multilingual Poet and Singer/Composer based in New Delhi. He is an Assistant Professor of English Literature at University of Delhi. His works have appeared in Kweli, Sentinel Literary Quarterly, Contemporary Literary Review India, Expound, Enclave/Entropy, Five2One, Asian Signature, Praxis Magazine, SETU, World Poetry Almanac 2017-18 and elsewhere. His selected works have been translated to more than 20 world languages. He is associated with the World Poetry Movement. Recently, his works are curated for FEKT by Pulitzer nominee Fahredin Shehu.

Debasish Parashar is a Multilingual Poet, Creative Entrepreneur, Singer/Musician and Lyricist based in New Delhi, India. He is an Assistant Professor of English literature at the University of Delhi. Parashar is the Founder & Editor-in-Chief of Advaitam Speaks Literary journal. With his debut song ‘Pamaru Mana’ (2018), Debasish became probably the first Indian singer/composer who dared to fuse 600-years-old Borgeets of Assam with Western Orchestral feel (with layered violins, pianos, snares & vocals) challenging the religious and ritualistic conventions of the Satras. His debut Music Video ‘Shillong’ from his debut EP ‘Project Advaitam’ released in the month of September 2018. He has sung for Raag, In Search of God, MUSOC XXV and elsewhere.

His write-up on Majuli has been listed amongst top 100 online #worldheritagesites stories globally in May 2016 by Agilience Authority Index.

Debasish has received invitations to participate in various national and international literary events/festivals including the 12 th International Writers Meeting organized by UNESCO affiliated Writers and Artists Union of Tarija (Bolivia), 12 International Writers’ Festival-India by India Inter-Continental Cultural Association (India) and The 3 rd Edition of Festival Itinerante in Colombia among others.

Debasish Parashar has received an Honourary Diploma (Diploma de Honor) signed by the Consul of Isla Negra, Chile for the International organization Movimiento Poetas Del Mundo (Movement of Poets of the World). The World Institute for Peace, Africa, offered him to receive the honour of A World Icon of Peace in 2019. He could not receive the honour due to personal differences.

The Indonesian translations of some of his poems by A.S.Rijal were included in the English Poetry Appreciation syllabus of Makassar Islamic University, Indonesia for the year 2017-18. Parashar has been/is getting translated into more than 30 world languages including Russian, Dutch, Spanish, Czech, French, Romanian, Serbian, Albanian, Persian, Afrikaans, Indonesian and Arabic. His poetry has been featured in 10 different books/anthologies from renowned publishing houses in the USA, Russia, the Netherlands, Serbia and Mongolia. Overall, his poetry has appeared in more than 30 countries of the world.

Debasish is associated with the World Poetry Movement.

To know more about him:

3. Where Are You From? (English/Persian), edited by Soodabeh Saeidnia (New York)

8. Flowers of the Present, edited by Hannie Rouweler (Demer Press, The Netherlands)

9. Flowers of the Seven Seas, edited by Hannie Rouweler (Demer Press, The Netherlands) 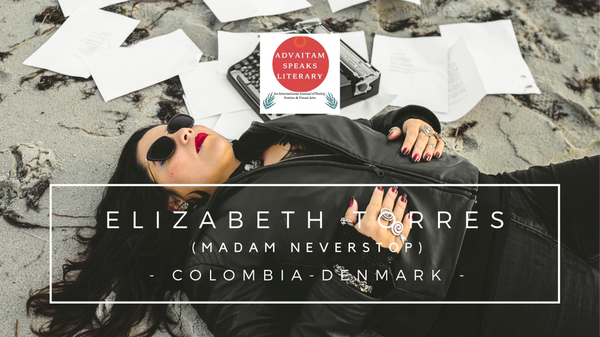 ELIZABETH TORRES (Madam Neverstop) was born in Bogotá, Colombia in 1987. She is a Poet, Multimedia Artist, Translator and Speaker. Her work intertwines poetry, visuals and soundscapes, language and performance, combining visions and concepts across various art forms and media. Elizabeth is a prolific author of over 20 poetry books published in various languages, most of them which she also illustrated, who has travelled to 30 countries throughout her career as part of cultural events and project

María Elena Escudero Ortíz was born in Anserma- Caldas (Colombia) in 1958. She studied plastic arts in the school of arts called Eladio Vélez of Itagüí Antioquia. She has participated in the following collective expositions: She has been teaching in various private and public sector institutions for 25 years, organising workshops for children in deprived communities. She has been teaching children with disabilities for 3 years. 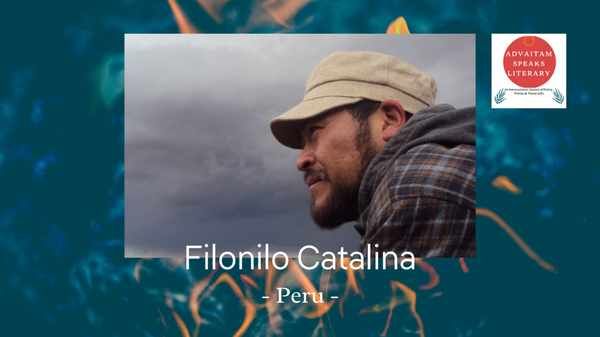 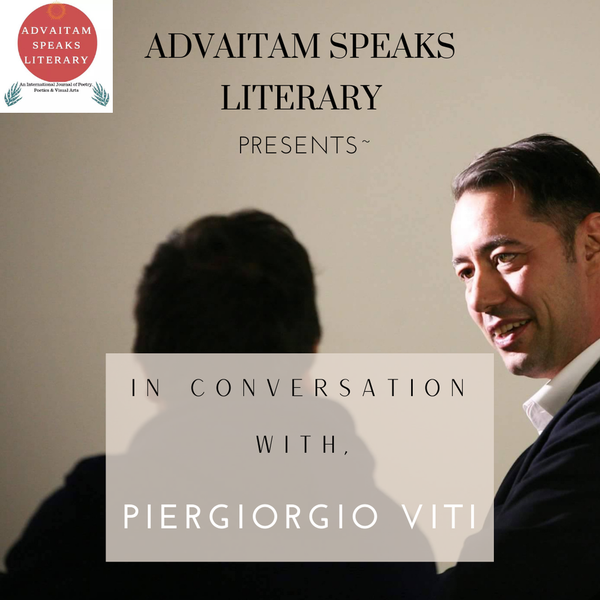 “Perhaps this is the authenticity that distinguishes me, going as far as possible from the comfort zone, trying to be ironic, because the highest form of brutality is irony. “~ Piergiorgio Viti

Piergiorgio Viti lives in Italy, where he is a middle school teacher. His poems are translated into Spanish (Jorge Aulicino and Antonio Nazzaro for Centro Culturale Tina Modotti in Caracas), Greek (Stavros Girgenis) and Romanian (Geo Vasile and George Nina Elian). In 2011 he published the first poetic collection, “Accorgimenti”, while in 2015, for Italic publishing house, “Se le cose stanno così” was released. He also wrote for the theater : “The fable of Virginio and Virgilio”, with famous sing 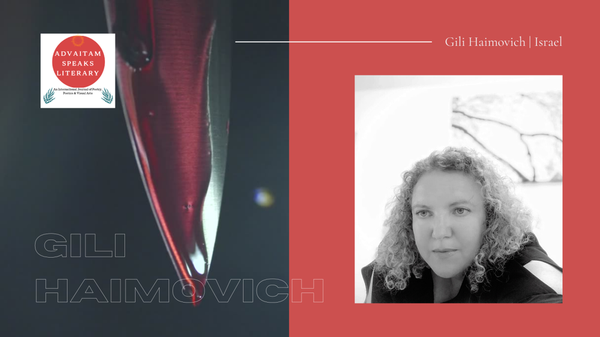 Gili Haimovich is a prizewinning bilingual poet and translator in Hebrew and English. She won the international Italian poetry competition Ossi di Seppia for best foreign poet (2019) and awarded as an outstanding artist by the Ministry of Culture, (Israel, 2015) among other prizes. Both of her last books in Hebrew Landing Lights, (2017) and Baby Girl, (2014) won grants from The Acum Association of Authors and her second book Reflected Like Joy, (2002) won The Pais Grant for Culture. She is the a 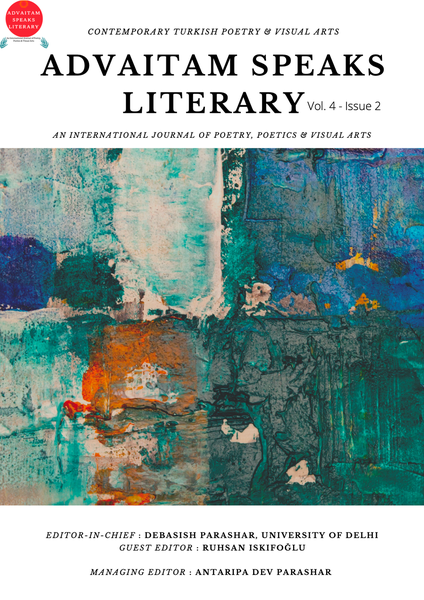 This Special Collaborative Issue of Advaitam Speaks Literary features some of the most prominent voices of Contemporary Turkish Poetry and Visual Arts. Advaitam Speaks Literary has carved a niche in world literature in a short span of time with its high literary value, illustrious contributors, uncompromising quality and visually aesthetic appeal . With deep roots in the Indian subcontinent’s core aesthetic values, the journal welcomes the world to India. Please read this wonderful collaborativ 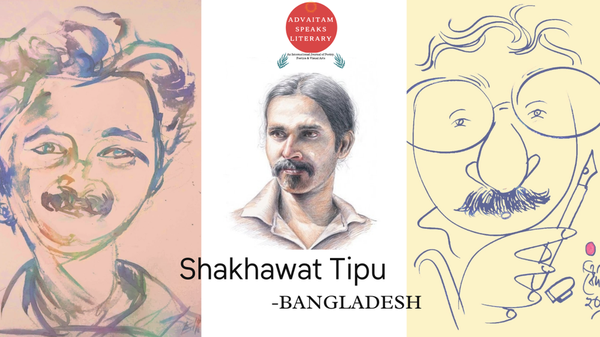 Shakhawat Tipu, born in 1971, lives in Dhaka. He is a distinguished bilingual poet, editor, translator and critical thinker from Bangladesh. The prominent figure of the new Bengali poetic language movement, Tipu established himself as the leading poet in his generation. His poems translated in Spanish, Italian, Greek, Serbian, Slovenian, and English. He published seven poetry books and an art critics book. Recently he published a Bengali poetry book ‘Razar Kangkal’ [The skeleton of prince (2020) 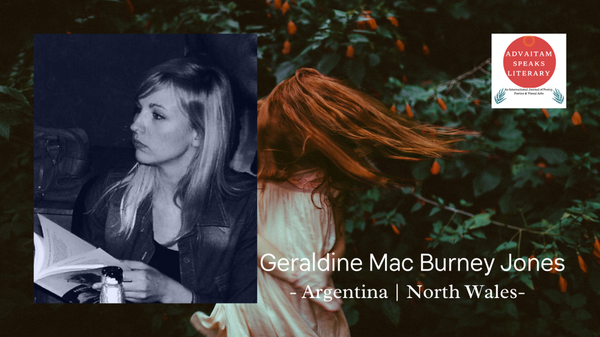 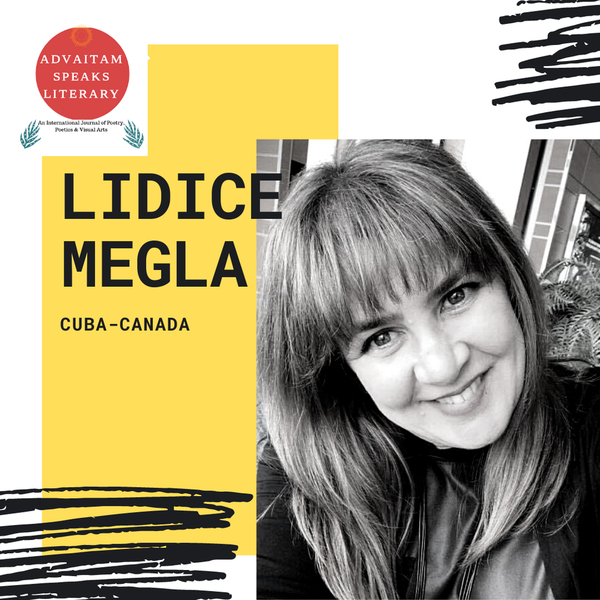 Lidice Megla (1968) was born in Cuba. Lidice is an Author, Poet, Translator and Educator who has been residing in Canada since 1999. She was the winner of the international poetry contest “El mundo lleva alas”, 2018 Voces de hoy Publishing House and the winner of the poetry contest, “Arte con palabras” Art Emporium, Miami, Fl. 2020. She appears in several anthologies and literary magazines worldwide. Among her publications are the books of poetry “Tú la bestia” “Totémica Insular” and Mujer sin 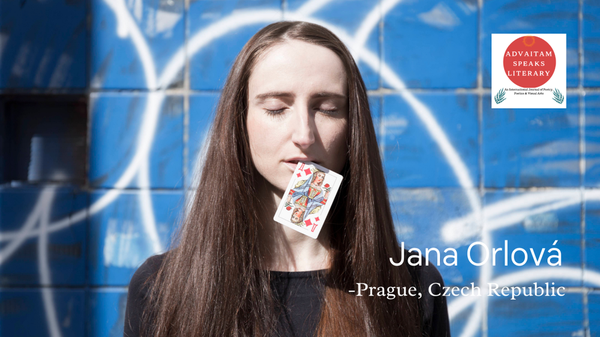 Jana Orlová (1986) is a poet and performance artist. She published “Čichat oheň” („Sniff the Fire“) with her own illustrations at Pavel Mervart publisher in 2012 and “Újedě” her second book of poetry at Větrné Mlýny publisher at 2017. Her works appeared in “Nejlepší české básně” (Best Czech Poems) at HOST publisher. Her poems were translated into Romanian, Ukrainian, Belarusian, Polish, Hungarian, English and Arabic. She gained the “Objev roku” (Breakthrough Act ) Award at Next Wave Festival for 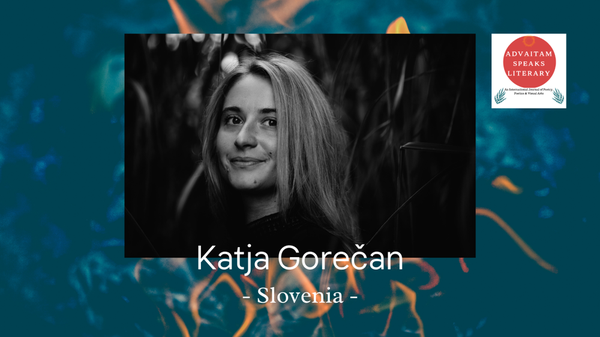 Katja Gorečan was born in 1989 in Celje, Slovenia. She received a Bachelor degree in Comparative Literature and Literary Theory at the University of Ljubljana, and finished her Masters studies in Dramaturgy at the Academy for Theatre, Direction, Film and Television, also in Ljubljana. Gorečan took part in a creative writing course, specializing in dramatics. This resulted in the realisation of her one-act drama “Seven girl’s questions”. In 2012 her second poetry collection “The Sorrows of Young 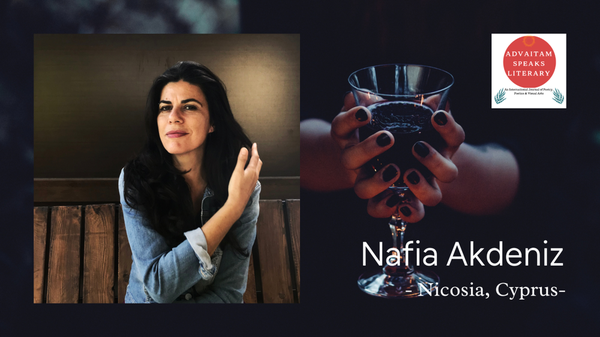 A Poem by Nafia Akdeniz (Nicosia, Cyprus) ~ Poet, Researcher and a Senior Instructor of English at the Eastern Mediterranean University ~ Turkish / English

Nafia Akdeniz was born in Nicosia, Cyprus. She studied English Literature and Humanities at the Eastern Mediterranean University. Her poems, translations and articles have been published in various literary and academic journals. She published her first collection of poetry ‘Yok/Absence’ in 2013 (second edition, 2016). Her poems have been translated into English, Greek, German and Persian. She has been working as a senior instructor of English at the Eastern Mediterranean University since 2000. 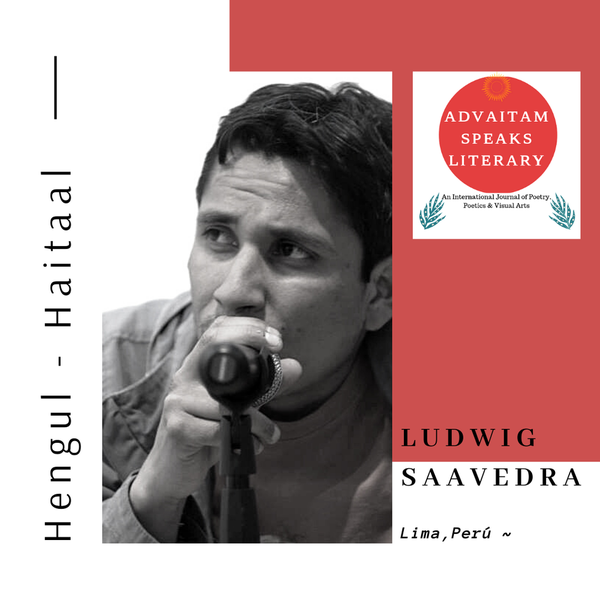 LUDWIG SAAVEDRA studied Literature in National University of San Marcos. He has published poetry collections such as: ‘Bloom’ (2009) and ‘The Vinil Sea’ (2015), both under the Parachute Publishing imprint. Includes poetry anthologies such as ‘The Reefs’, cardboard edition in charge of Amaru Cartonera; ‘Sick of Sounds’ and ‘Standing up the Explosion’ in 2017 and 2018 respectively. He has participated in different poetry festivals and Book Festivals in Peru, Ecuador, Chile, Bolivia and the north o 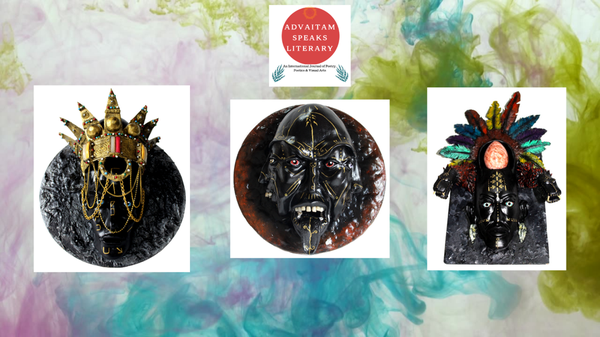 Camila Ríos Monsalve was born in Medellín, Colombia. Her works of sculpture have been published in different Latin American countries and Spain. She studied International Business and is a specialist in International Trade. She currently works as a researcher and director of social and educational projects for the OBSERVA AC Organization. She is also a co-author and illustrator of the Games for Peace Briefcase and of the books “El Cuento Revienta”, “Manual de Niñología” and “Pasatiempos y activi

Nigar Arif was born in 1993 on 20th of January in Azerbaijan. She studied at Azerbaijan State Pedagogical University in the English faculty in 2010- 2014. Nigar Arif is a member of the “World Youth Turkish Writers’ Union” and graduated from “III Youth Writers’ School” in “Azerbaijan Writers’ Union”. She is also a member of the “International Forum for Creativity and Humanity” in Morocco. Her poems have been partially translated into English, Turkish, Russian, Persian, Montenegro, and Spanish and 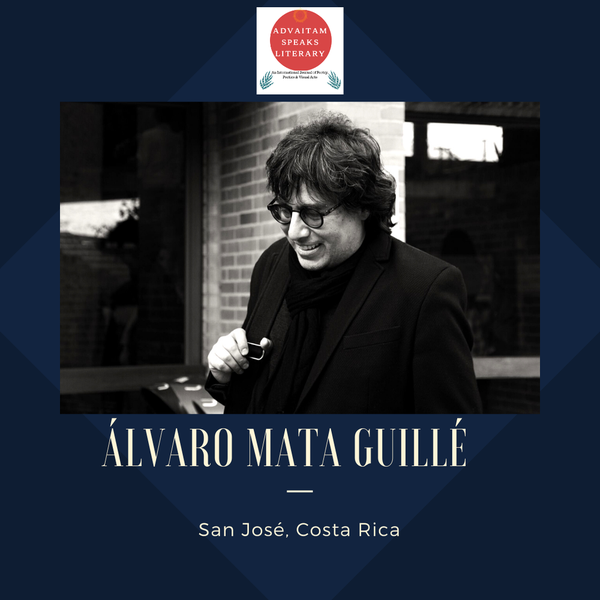 Álvaro Mata Guillé was bron in San José, Costa Rica. He currently lives in Mexico City. He is a poet as well as a columnist of the review, Libros y letras, published from Bogota, Colombia. Mata is the Director of the project: Poesía en tránsito-Corredor cultural, which brings together festivals of Mexico, Costa Rica, El Salvador, Guatemala, and Spain. He coordinates the summits in Costa Rica, Mexico, and Spain. He is the Director of the Festival Internacional de poesía En el lugar de los Escudos 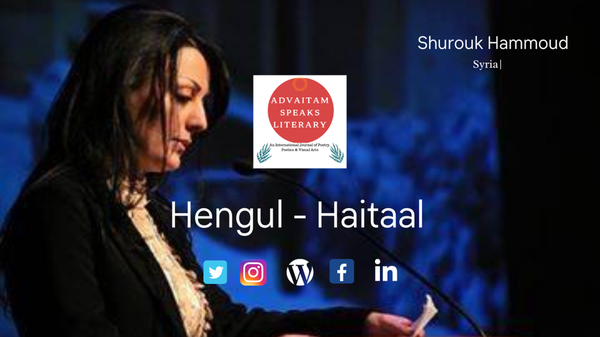 Shurouk Hammod , born in 1982, is an award-winning Syrian poet, literary translator and journalist. She is an Arts graduate and has a Masters degree in Translation Studies from Damascus University. She has three published poetry collections in Arabic and one in English titled The Night Papers. Her poems have been published in many poetry anthologies in France, Serbia, Netherlands and India. Shurouk is a member of Palestinian Writers and Journalists Union and an honorary member at NAJI Naaman 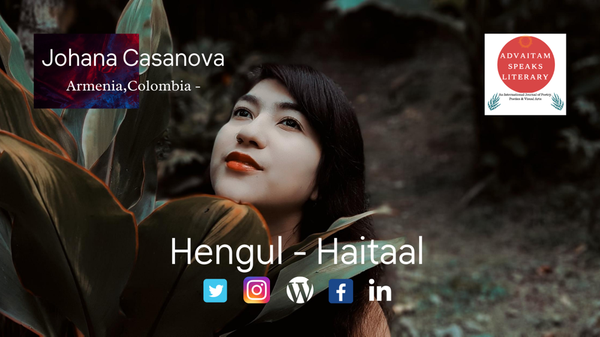 Johana Casanova (Gaia) was born in Armenia, Quindío (Colombia) in 1991. She is a student of Environmental Control technology. Johana is a poet, theater actress, and promoter of the spoken word. She is a member of the poetic collective New Voices( https://www.nuevasvoces.org/ ). She is a winner of the International Circulation Grant of the Mayor of Medellín. She has participated in the international poetry festival of Havana (Cuba), the International Poetry Festival of Medellín and in several oth 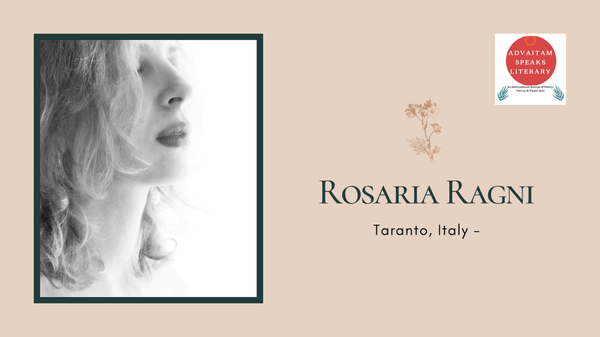 Rosaria Ragni was born in Taranto, Italy. Poet and prose writer, freelance ghostwriter, SEO copywriter and cultural promoter. After graduating in painting from the Academy of Fine Arts in Bologna, she continued her activity as a painter by participating in group and solo exhibitions. She has collaborated with various newspapers and Web TVs, dealing with interviews and writing articles, reviews and television reports. Her poems have been translated and published in Poland and India. Her latest pu 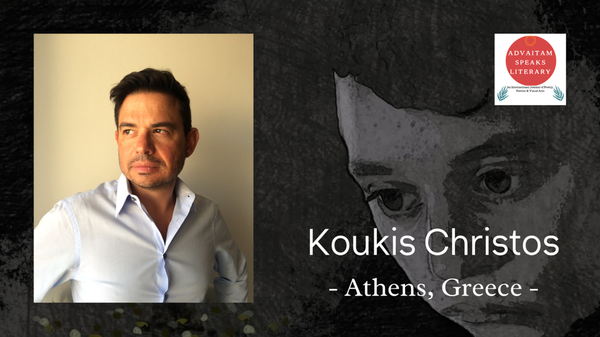 Koukis Christos is a poet and writer and the curator of the Crete International Poetry Festival which takes place in Greece every year. He was born in 1979 and he has published poetry books in Greece, France, Italy and Serbia and poems of his have been translated in eight (8) languages. He has participated in poetry anthologies in Greece and other countries and in several international poetry festivals around the world. He has worked in poetry and culture magazines and has written lyrics for son
Load More Articles
Close ✕